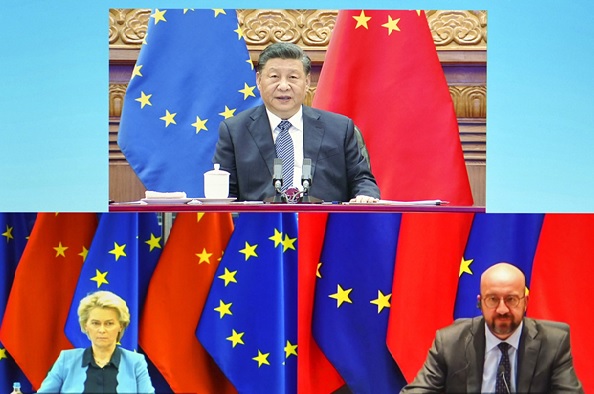 China-EU Summit: Differences and Agreements on Peace and Cooperation

It was made clear by the EU Council, before the summit took place that “the main focus of the summit will be on the war in Ukraine, the engagement of the international community to support Ukraine.” The latest EU-China leaders’ summit was held on December 30, 2020 and was focused on the Comprehensive Agreement on Investment reached then, and combatting the COVID-19 Pandemic.

In the press conference following the summit, the EU leaders made it clear that their whole focus was on urging China to put pressure on Russia to stop its military operation in Ukraine. Given China’s declared position regarding the crisis in Ukraine and China’s relationship to Russia (see below), the demands of EU could be regarded as unrealistic as far as China is concerned.

President of the European Commission, Ursula von der Leyen, was more specific. She said: “We underlined that the Russian invasion of Ukraine is not only a defining moment for our continent, but also for our relationship with the rest of the world. There must be respect for international law, as well as for Ukraine’s sovereignty and territorial integrity. China, as a permanent member of the UN Security Council, has a special responsibility. No European citizen would understand any support to Russia’s ability to wage war.”

Concerning the EU sanctions imposed on Russia and China’s responsibilities, the press release continued: “The EU recalled that the international sanctions against Russia were imposed with the sole purpose of stopping Russia’s aggression and despite a significant economic impact on the EU and its partners globally. Any circumvention of the effects of the sanctions or any aid provided to Russia would prolong the bloodshed and lead to even greater losses of civilian lives and economic disruption.”

This could be interpreted by the Chinese as to mean that China will be responsible for the prolongation of the war if it does not join the EU and the U.S. in imposing sanctions on Russia and practically decoupling from it.

Otherwise, on the positive side, the EU leaders stated that the two sides had agreed on cooperation in the fight against the COVID-pandemic through vaccination campaigns in collaboration with the World Health Organization (WHO) and the post-pandemic economic recovery, enhancing bilateral trade, climate change, green transition, and cooperation in the field of digital technology and cybersecurity.

According to a press release issued by the Chinese Foreign Ministry, “Xi recalled his visit to the EU headquarters eight years ago when he suggested that China and Europe work together to build a bridge of friendship and cooperation across the Eurasian continent”. He also said that the Ukraine crisis “has come on top of a protracted COVID-19 pandemic and a faltering global recovery”. Therefore, he emphasized, “China and the EU, as two major forces, big markets and great civilizations, should increase communication on their relations and on major issues concerning global peace and development, and play a constructive role in adding stabilizing factors to a turbulent world.”

Reflecting on the difficulties created by political tensions between the two sides in the past year but emphasizing the importance of a pragmatic approach based on focusing on commonalities rather than differences and trade and economic cooperation, President Xi said that “since last year, China-EU relations have made new progress despite challenges, and China-EU cooperation has achieved new results despite difficulties. It has been proven that China and the EU share extensive common interests and a solid foundation for cooperation, and that only through cooperation and coordination can the two sides resolve problems and rise to challenges.

Revealing a certain irritation due to the demands made by the EU leaders and the adherence of the EU to the same stances as the U.S. regarding the Ukraine crisis and China , President Xi called on the EU to form its own perception of China, adopt an independent China policy, and work with China for the steady and sustained growth of China-EU relations.” This statement reflects the level of tension that existed between the parties in this summit.

China’s position on the Ukraine crisis and relations with Russia was explained earlier by the Chinese Foreign Minister Wang Yi. On Thursday, March 30, he made statements to the press following the third Foreign Ministers’ Meeting among the Neighboring Countries of Afghanistan. “China’s stance is consistent. In dealing with all hot-spot issues, China stands on the side of peace, dialogue, and justice,” he said. He reiterated that “China believes that dialogue and negotiations are the only way out of the Ukraine issue” adding that “China calls for a ceasefire and supports direct dialogue between Russia and Ukraine.”
According to Wang Yi, China advocates common, cooperative, comprehensive and sustainable security. China also advocates for respect and accommodating the legitimate and reasonable concerns of all parties, in reference to Russia’s pre-war demands for security guarantees from the EU and NATO.

Concerning economic sanctions, Wang said: “China firmly opposes unilateral sanctions that have no basis in international law. China calls for safeguarding the international industrial and supply chains and avoiding moves that harm normal trade and economic exchanges between countries and people’s lives.”
As the Belt and Road Institute in Sweden (BRIX) explained earlier, the Chinese foreign policy doctrine believes firmly in the idea that peace and security can only be consolidated through economic cooperation.

It is for these reasons that the Chinese leadership will very likely reject the demands made by the EU leadership in the April 1 Summit.

In a new webcast / podcast produced by the BRIX to assess the outcome of this summit, two distinguished experts, Professor Chen Xiangming, Professor at Trinity College in Hartford, Connecticut (USA), and Henry Tillman, Founder and Chairman of China Investment Research in London presented their reflections on what the EU and Chinese sides released following the summit. Host Hussein Askary indicated that the goals and purpose of the BRIX is to achieve peace and stability in Eurasia and the world through economic cooperation and trade along the lines of the Belt and Road Initiative.

The main take aways from this roundtable discussion were that it is impossible for China to decouple from Russia as demanded by the EU. However, China and the EU have everything to win from supporting a peaceful and diplomatic resolution of the conflict in Ukraine. On economic aspects, Tillman emphasized that despite all the negative media coverage of the tensions between China and Russia, economic cooperation, trade, and investments continued both ways. Key areas have been COVID-19 Vaccine coproduction, co-investments in key industries with European companies in the fields of green energy and climate change mitigation, auto industry, etc. Inbound investments from both the EU and the U.S. to China have increased.

What the numbers say

A review of samples of data provided to the readers of the BRIX by the China Investment Research (Read full document), of Chinese foreign direct investments in Europe, and European investments in China, we see an interesting trend. China Inbound versus Outbound in 2021, we find that China outbound fell from $222 billion in 2016 to $60 billion in 2021. In the same time following the 2018 openings and the 2020 “dual circulation” launch by China, inbound surpassed announced outbound investments.

Q4 2021 data concerning the EU show that there were at least 26 investments by China in Europe. Germany led in volume, Finland led in amounts, followed by Germany. Inbound (i.e. European investments into China) recorded at least 27 announced investments, with over 50% from Germany (NEV, industrial), as well as from France, Switzerland, the Netherlands, Norway and Denmark. The largest deal was Maersk’s $3.6 billion in a Hong Kong based, 14 country Asian logistics business.

What becomes clear is that President Xi’s statement that “China-EU cooperation has achieved new results despite difficulties” is grounded in reality.

What is fascinating is that the data from Q1 2022 shows that these activities continued even during the Ukraine crisis.

Professor Chen stressed that Ukraine is an important bridge in the whole Eurasian communication systems like rail freight. China has attached much importance to cooperation with Ukraine in the fields of agriculture, manufacturing, and infrastructure. He stressed that whenever the conflict is resolved, their will be a big process of reconstruction in cooperation with China.

The host concluded that the tragedy in Ukraine, with all its implications, shows that there is only one way forward to peace and stability, which is the integration of all parties, including Russia and Ukraine into the Belt and Road Initiative to enhance win-win cooperation.