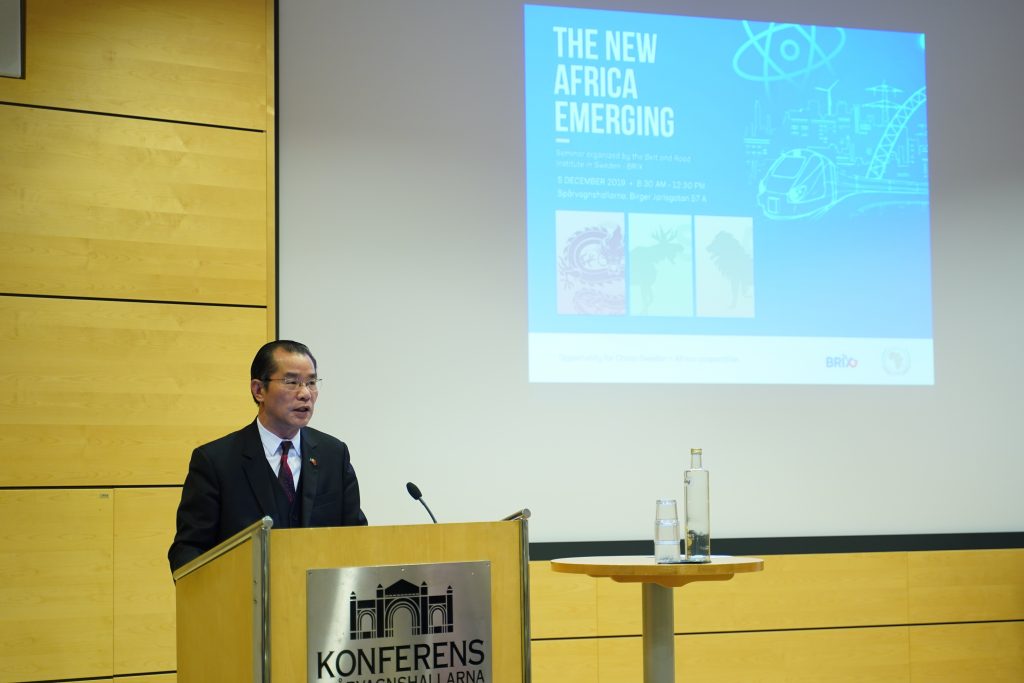 Keynote speech by the Ambassador of the People’s Republic of China to Sweden, H.E. Mr. Gui Congyou at the Belt and Road Institute in Sweden (BRIX) seminar “The New Africa Emerging”, December 5, 2019.

Your Excellencies, experts and entrepreneurs

It gives me great pleasure to attend the seminar hosted by BRIX. This seminar focuses on economic and social development of the African continent, and discusses the relations between joint contribution to BRI and growth and prosperity of Africa, which is highly important to promoting China-Africa cooperation and cooperation between China and a third party in Africa.

China-Africa friendship goes back centuries. Friendly exchanges between China and Africa started as early as the second century BC during the Han Dynasty. After the founding of the new China, we firmly supported the efforts by African nations for independence and liberation. African countries extended immense support and selfless help in international affairs for China, such as the restoration of China’s seat in the UN. After entering a new era, China and Africa built a comprehensive strategic partnership, and scored significant cooperation achievements in many areas.

Last September, the Forum of China Africa Cooperation Summit in Beijing was successfully held, where leaders from China and African countries unanimously adopted the decision to synergize the BRI with African Union’s Agenda 2063 and development strategies of individual African countries, to build a China-Africa community with a shared future, and to implement the eight major initiatives, bringing China-Africa cooperation onto a new level. High-level engagement has never been closer. We now enjoy enhanced mutual political trust, deepened exchanges on governance and closer communication and coordination on international affairs. Collaboration on the Belt and Road Initiative is gathering pace, with cooperation documents signed between China and 40 African countries and the AU Commission. In light of Africa’s practical needs, we have jointly formulated country-specific lists, according to which more than 880 projects will be carried out in the coming three years. Major projects supported by grants or concessional loans from China are making steady progress. Last year, two-way trade exceeded US$200 billion, making China Africa’s largest trading partner for the tenth straight year. The follow-up actions made a visible difference for the livelihood of local communities. As such, they have been widely welcomed by African countries.

China-Africa cooperation is characterized by openness and inclusiveness, and BRI cooperation is based on extensive consultation joint contribution and shared benefits. BRI cooperation between China and Africa is an open initiative. It does not formulate a circle that excludes others, nor does it seek to build a sphere of influence. There is no superior model of cooperation with Africa, and the key is who is really delivering benefits to Africa. BRI cooperation is no solo performance, instead it is a symphony that welcomes the participation of all parties. In fact, there have been useful attempts by China and Western countries including the UK and France to carry out third party cooperation in Africa, which fully attests to the fact that Africa has broad space for cooperation with countries around the world. There are also many aid and cooperation projects by Swedish Government in Africa. The Chinese side is willing to synergize strengths with all countries including Sweden to make contributions to peace, stability and development of Africa.

As a Chinese poem says, “Time-tested friendship is like gold, whose color will not be reduced by flame and fire.” No matter how the international situation changes, the steps of win-win cooperation by China and Africa will never stop. China will follow the principles of sincerity, real results, friendship, and good faith and friendship before interests, and firmly stand with Africa and the rest of the developing world. China will work to bring more benefits to the peoples of Africa and China, and open a more beautiful chapter of China-Africa cooperation.

I wish the seminar a full success!