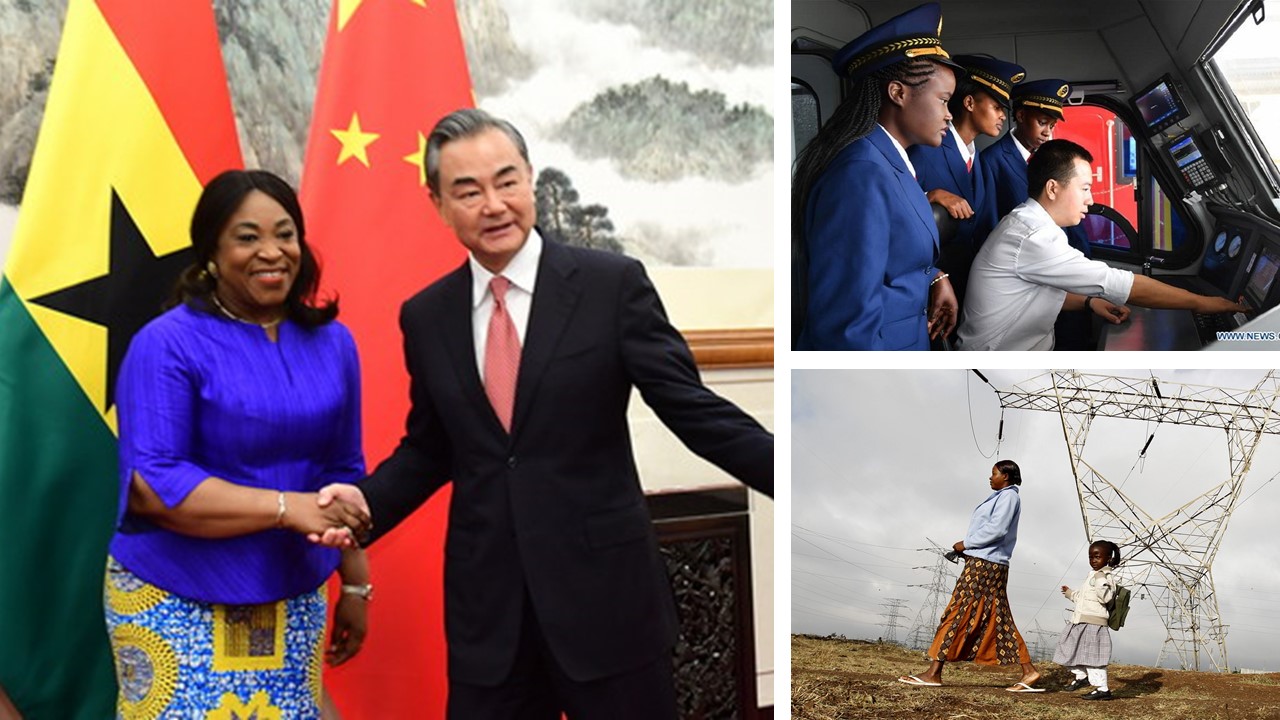 Hussein Askary (The Belt and Road Institute in Sweden)

China’s Foreign Ministry spokesperson Zhao Lijian announced on January 1, 2022 that “continuing the tradition of Chinese foreign ministers starting every new year with a visit to Africa, State Councilor and Foreign Minister Wang Yi will visit Eritrea, Kenya and the Comoros from January 4 to 7, 2022 upon invitation.” Afterwards he will visit Maldives and Sri Lanka upon invitation. Eritrea was the latest country joining the Belt and Road Initiative (BRI), making the total number of nations joining the BRI 142. This is another testimony to the unique foreign policy China has pursued in recent decades, which is establishing peace through economic development and cooperation, not building military alliances.

Two recent events consolidated the idea that for China, economic development and cooperation is the main driver of its foreign policy. Although facing major political and military provocations by Western powers, especially the United States, China is reasserting the fact that any problems among nations can only be addressed by first adhering to international law as anchored in the United Nations Charter, and second through building economic and cultural bridges among nations.

These two events were the conclusion of the 6th Plenary Session of the Communist Party of China (CPC) 19th Central Committee held on November 8-12 and the virtual summit of the Forum for China-Africa Economic Cooperation (FOCAC) hosted by Senegal on November 29-30.

The 6th Plenary Session adopted a historic document called “Resolution on the Major Achievements and Historical Experience of The Party over the Past Century” , in which a chapter titled “bolstering the diplomatic front” identifies the principle of using economic development and cooperation as the means of the achieving peace and normal relations with other nations. It also views China’s own development as a contribution to peace in the world through contributing to economic development in other nations. Although it warns that “the world has entered a period of turbulence and transformation,” it suggests a solution based on cooperation on the one hand and establishing a system of global governance based on the UN Charter on the other. “We must work to develop a new type of international relations, promote the building of a human community with a shared future, champion the shared human values of peace, development, fairness, justice, democracy, and freedom, and steer the tide of human progress,” the document states. It stresses that China has “strengthened solidarity and cooperation with other developing countries with a commitment to upholding the greater good in the pursuit of shared interests and following the principles of sincerity, pragmatism, affinity, and good faith, and put in place collective cooperation mechanisms that cover all other developing countries”.  It takes the example of China’s efforts to deal with the outbreak of the COVID-19 pandemic by launching “the largest global emergency humanitarian operation since the founding of the People’s Republic, providing supplies, medical support, and vaccine assistance for many countries, especially developing countries, and engaging in vaccine cooperation with a number of them.”

One of the reasons why China and other nations like Russia are insisting that priority must be given to respecting the UN Charter is that this global governance system has eroded du to unilateral actions taken by the United States and its allies under new brands like “the rules-based order” and the “responsibility to protect” that have caused massive suffering in Afghanistan, Iraq, Libya, Syria, and Yemen.

The role of the BRI and question of Africa

The Resolution also renewed China’s commitment to the Belt and Road Initiative as a “initiative for peace”. It states that “China has promoted high-quality development of the BRI” stressing “We have advanced a large number of cooperation projects with significant implications for fueling economic development and improving people’s lives in countries along the BRI routes and worked to build the BRI into an initiative of peace, prosperity, openness, green development, and innovation that brings different civilizations closer, and a widely welcomed public good and platform for international cooperation in today’s world.”

The best example of this is China’s cooperation with Africa, which was addressed in the second of the events referenced above, the FOCAC Summit. In his keynote speech,  President Xi Jinping reminded the other African leaders that this year marked the 50th anniversary of the restoration of the seat of the People’s Republic of China at the UN and that the African nations played a great role in that by showing solidarity with China in this matter. Focusing on the economic aspect of relations with Africa, he said: “At the UN General Assembly this year, I put forward the Global Development Initiative, which dovetails with the African Union’s Agenda 2063 and the UN’s 2030 Agenda for Sustainable Development. We welcome the active support and participation by African countries”.

President Xi presented a nine-point program to be implemented by China within the joint initiative which the two sides had agreed upon as “the China-Africa Cooperation Vision 2035”. All but the ninth point, is on economic cooperation and development.

Only the ninth point deals with security and military matters, but even here it is largely focused on peace keeping operations, but also providing military assistance to fighting terrorism, and conduct joint exercises and on-site training between Chinese and African peacekeeping troops.

All these points were thoroughly elaborated in a White Paper issued by China’s State Council Information Office titled, “China and Africa in the New Era: A Partnership of Equals” on the eve of the FOCAC Summit.

The West must work with the BRI not againt it

This is a stark contrast to the flagrant interference by the U.S. and other allies into the internal affairs of African countries, including their economic policies, foreign policy, and internal social and political dynamics. When pressure does not give results, military force is used as in the case of Libya in 2011 which had horrifying consequences for the Libyan people and many African nations. On top of that, U.S. officials regularly travel to Africa to warn them against cooperating with China, which in reality, is an insult to those nations. Just ten days before the FOCAC Summit started, U.S. Secretary of State Antony Blinken, was in Senegal, the host of the summit, in a third stop of his tour which took him to Kenya and Nigeria. Blinken made ludicrous claims in Senegal about how the fictional U.S. Build Back Better World (B3W) was superior to the BRI and cooperation with China, which he denounced for human rights violations and for enticing nations into alleged debt traps created by the BRI and Chinese development projects. Interestingly, the reaction from Africa to this was that two more nations joined the BRI the same week. These were Eritrea and Guinea Bissau who signed a memorandum of understanding each with the respective Chinese ambassadors to their countries in the week following Blinken’s tour. This meant that all African nations but four of them have joined the BRI.

It is ironical that the more the West warns against China and the BRI, the more nations and organization join it. What distinguishes the BRI from other Western initiatives is that it is result-based and people-oriented. It creates tangible effects in the economies and wellbeing of nations. Although a major aid provider, China has moved away from the failed model of making African nations addicted to aid, because it does not create the means by which these nations can raise their productivity, such as building infrastructure and transfering productive technology. In his speech to the FOCAC summit in Johannesburg, South Africa in 2015, President Xi identified in his keynote speech what he called “the three bottlenecks of development”. These are: lack of capital, lack of infrastructure, and shortage of skilled labor”. If Africa could overcome these bottlenecks, President Xi argued, the African nations can eliminate poverty, exactly as China has done. “It is entirely possible for Africa, as the world’s most promising region in terms of development potential, to bring into play its advantages and achieve great success…. The achievement of inclusive and sustainable development in Africa hinges on industrialization, which holds the key to creating jobs, eradicating poverty and improving people’s living standards,” President Xi emphasized. If we follow China’s efforts in Africa since then, we find that they are consistent with this vision.

However, the slow pace of development in Africa is due to the fact that China is standing almost alone with African nations in tackling this massive challenge. If the U.S., Europe, Japan, and other industrial nations had contributed in a similar manner, Africa’s fight against poverty, famine, and disease would have been greatly enhanced.

The time has come for the West to realize that the true name of peace and security is economic development. This was the vision presented already in 1967 by Pope Paul VI who insisted in the Encyclical “Populorum Progresso” (On the Development of Peoples), that “development,[is] the new name for peace”. He wrote then:

“When we fight poverty and oppose the unfair conditions of the present, we are not just promoting human well-being; we are also furthering man’s spiritual and moral development, and hence we are benefiting the whole human race. For peace is not simply the absence of warfare, based on a precarious balance of power; it is fashioned by efforts directed day after day toward the establishment of the ordered universe willed by God, with a more perfect form of justice among men.”

BRIX high-level seminar on Africa and the BRI