How the Belt and Road contributes to a global healthcare system

As was discussed in a webinar on the Health Silk Road organized recently in the Swedish capital Stockholm by the Belt and Road Institute in Sweden, speakers noted that the Corona pandemic has exposed the unpreparedness of most countries in the world, including in the advanced sector, to face such a crisis in terms of the physical requirements such as hospital beds, intensive care units (ICU) beds, personal protective equipment (PPE), ventilators, disinfectants, medicines, and testing equipment and materials. There are many reasons for this shortcoming, but the obvious answer is building an infrastructure and industrial capacity that can cope with such emergencies.

China managed to mobilize both human and physical resources swiftly and controlled the outbreak in Wuhan, Hubei and mainland China in general within two months. One main reason for this is the logistics and organizational skills China has built up in thirty years, building and developing an unprecedented infrastructure in the history of mankind. All aspects of infrastructure played a role in this effort: transport, power, water, telecommunications. The industrial capacity and construction capacity were shown clearly in China building a new 1000-beds hospital in Wuhan (Huoshenshan Hospital) within 10 days. China’s industries managed to supply the country and then export PPE, testing kits, and ventilators to 83 countries around the world. This is an unparalleled achievement.

China’s ability to manage such feats hinges on two aspects: 1. Its organizational socio-political skills, 2. Infrastructural and industrial capacity. We will deal with the latter in this report, since different countries have different political, social, cultural and historical structures that cannot be generalized nor copied.

The fact that there is direct correlation between the availability of a strong infrastructure (transport, water, power, telecommunications) and the ability to provide healthcare for the population when needed in any country was emphasized in a detailed study published by the AIIB in March 2020 and titled “The Impact of the Coronavirus (COVID-19) and Its Implications for Infrastructure Priorities”.

the AIIB researchers correctly point to the importance of infrastructure for providing a good level of healthcare for populations, urging to redefine the priorities for infrastructure development projects by governments. It also pledged to support such priorities financially.

The AIIB, which is one of the key global financial institutions that emerged in the wake of Belt and Road Initiative (BRI) and is based in Beijing with a capital of US$ 100 Billion, is intervening to back the infrastructure of public health sector of its 100 member nations.

The report states: “The disruptions brought about by COVID-19 also highlight the importance of sustainable and resilient infrastructure. Firstly, developing economies will need to increase investments in healthcare and public health infrastructure. This is especially crucial in the context of megatrends such as urbanization and increased trade connectivity. Without proper public health infrastructure such as clean water and sanitation, developing economies will remain vulnerable to such outbreaks. A country’s readiness to cope with epidemics is correlated with its quality of infrastructure. Infrastructure development is a key part of health security and epidemic preparedness.”

It noted in a press release published on March 25, that “recognizing that countries with fragile infrastructure have less capacity to handle health crises, the AIIB is working to scale up infrastructure investment—including in public health, healthcare and information and communications technology (ICT)—to better serve members impacted by COVID-19.”

What are the requirements, globally?

In a thorough study conducted by experts of the Schiller Institute in the U.S., specific requirements are identified to build such a global healthcare system. This mission is so large in its magnitude, the authors called it an “Apollo Mission”. However, like the Apollo mission, which President John F. Kennedy predicted to be very hard but was nonetheless successful, this new mission is possible to achieve. The study starts with identifying the correct criteria for a modern healthcare system. It identifies the post WWII American healthcare system as a model based on the Congressional law “The Hill-Burton Free and Reduced Cost Act” (1964), which stipulated that the standard for a modern public healthcare system should be the provision of 4.5 hospital beds per 1000 people. However, since the shift of American economic policies in the early 1970s towards a neoliberal trend, this public health system was neglected. Today, the beds available per 1000 people in the U.S. has fallen to 2.9 of that post-WWII standard according to the World Bank. Russia stands at 8.2 beds per 1000 and China at 4.2.

However, what this WB list also shows is the disastrous conditions in many countries in the world, especially Africa, where public health facilities are way below anything that can cope with a serious outbreak of the Corona pandemic or any other epidemic or pandemic. Below is a sample of hospital beds available in African countries. We add a column for electricity consumption in kilowatts/hour per person per year in these countries for purposes of determining the requirements for having such hospital availability further below in this article. The reason should be obvious, since hospitals cannot exist in a void without electricity nor without clean water, transport, telecommunications or skilled workforce. For comparison, the electricity consumption in the U.S. is 12,071 KWH/hours per person/per year. In Sweden the figure is (13,000 KHW per capita/year). 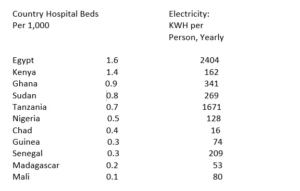 Africa, with 54 countries and 1.33 billion people, is home to many of the world’s deadly diseases. In the case of HIV/AIDS, 37.9 million people in the world have HIV, Africa has 27.5 million, nearly three-fourths of the world’s total. In the case of malaria, according to the WHO, in 2018, there were an estimated 228 million cases of malaria worldwide, and 405,000 deaths. Africa was home to 93% of all malaria cases and 94% of the deaths, many of them children under 5. Now comes COVID-19.

The physical requirements of the Health Silk Road

To understand the physical requirements for building a modern healthcare system, we take one well-documented example. The U.S. Energy Information Administration (EIA) issued a report in 2007 outlining the physical requirements of maintaining the 3,040 largest hospitals in the U.S. in terms of power and water specially. According to the EIA, the largest 3,040 hospitals, with approximately 915,000 beds (at the time of the study), used about 458 trillion BTUs of energy per year: 194 trillion BTUs in the form of electricity (57 billion kWh) and the remainder in the form of natural gas, district heating, and fuel oil. As for water consumption for all purposes was 135 billion gallons (ca 500 million cubic meters) per year.

To bring Africa to the same Hill-Burton standard of public healthcare, it can be estimated that the continent would need at least 15,000 new modern hospitals constructed containing 4 million new hospital beds. This would require approximately 25,000 MW of new power generation capacity and 3,5 billion cubic meters of clean water.

Africa will also need to build an industrial capacity to produce ventilators, PPEs, and medicines in huge quantities. It will require vast amounts of electricity and clean water. And, of course, increasing the food production capacity would be another major contribution to a better health for the population. This one too would require massive investment in infrastructure and machinery.

BRI and the new economic thinking

As China has proven, it is possible to build a brand new 1000-beds hospital in record time. However, what was available for the Chinese builders in terms of machinery, infrastructure, skilled labor, telecommunications, and credits are not available in Africa. Therefore, extending the Health Silk Road to Africa will require that not only China, which is already building large-scale infrastructure projects in Africa through the BRI network in Africa, but also the U.S., Russia, India, Germany, Japan, and other industrial nations to cooperate. Africa is three times larger than China, and providing the physical requirements for industrializing Africa and raising the living standards for its 1.3 billion population of mostly young people and children (estimated to reach 3 billion by 2050) will put tens of millions of people to work in Asia, Europe and the U.S. for at least two decades.

China’s investments in Africa and other developing countries are going into this direction. Between 2013 and 2017, China invested US$60 billion in African infrastructure and industrial projects. In the Forum for China-Africa Cooperation (FOCAC) summit in Beijing in 2018, President Xi Jinping pledged that China would invest another 60 billion in the coming five years. In terms of transport for example, China has built 6,000 kilometers of railway in Africa in the past few years. In the energy sector, China has invested US$50 billion in Africa since 2000, (58 billion in Latin America and 60 billion in Asia) according to the Boston University Global Development Center. But, to speed up the development of Africa, the other global economic powers need emulate China and join it in the BRI, and not focus merely on the now proven obsolete policy of mere emergency aid.

In light of this, a new financial architecture and credit system needs to be established. This could be modelled on the Bretton Woods system, established for the reconstruction efforts and trade in the post-WWII period. However, this time it should not be an exclusive club, but a global initiative.

A significant first step in this direction is to heed the calls of African leaders like Prime Minister of Ethiopia Abiy Ahmed for debt cancelling of the African nations. It is unthinkable for African nations, under the economic circumstances created by the Corona pandemic, to continue to service their debt. Lifting this burden will allow these nations to be able to generate new credit, but this time for investments in infrastructure, healthcare, and education and scientific research. The practice of kicking the debt ball forward by borrowing ever more expensively to pay old debt has been one of the biggest obstacles to Africa’s development.

The BRI is already a functioning framework for win-win cooperation among nations. Extending the BRI to make it a global mechanism of cooperation would be the decisive factor in building a global healthcare system that is capable of facing such challenges as this pandemic and future health, environmental and even cosmic events more appropriately.