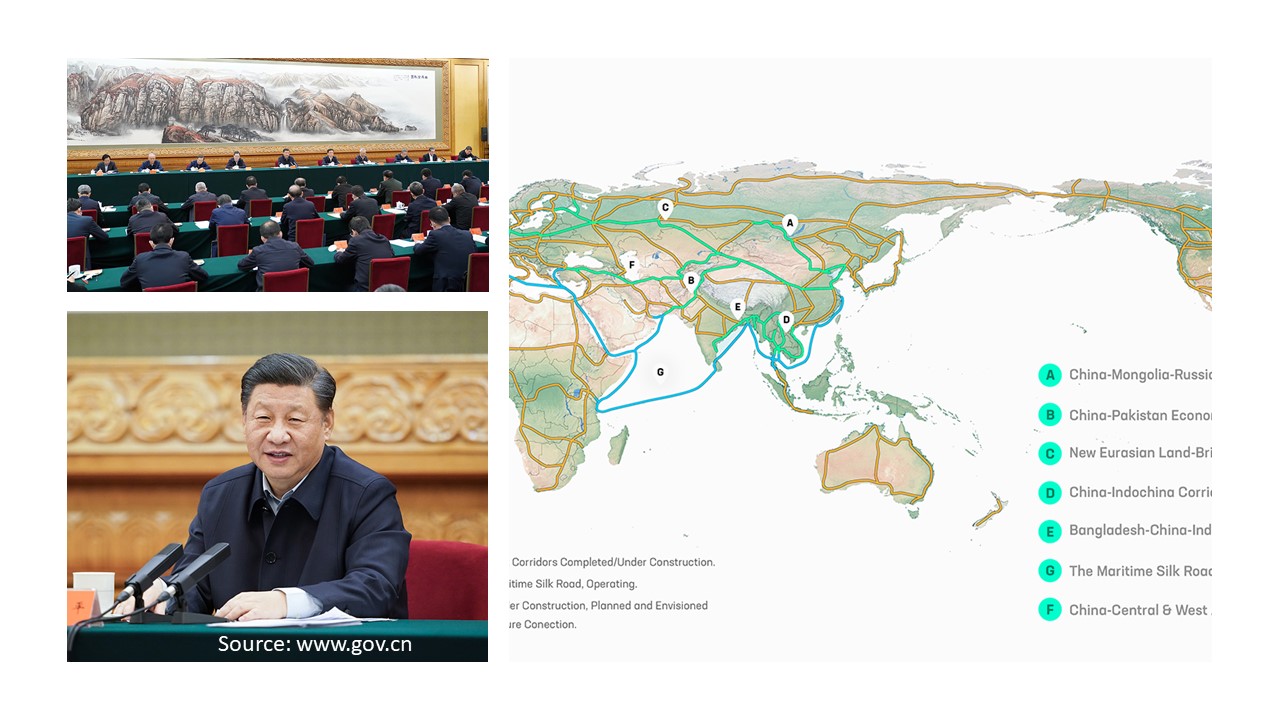 On the 8th Anniversary, Xi Jinping Addresses Symposium on Belt and Road Initiative

This fall marks the eighth anniversary of the announcement by China’s President Xi Jinping, of the Belt and Road Initiative (BRI), when he announced the Silk Road Economic Belt in Kazakhstan on Sept. 7, 2013 and the 21st Century Maritime Silk Road in a speech before the Parliament of Indonesia on Oct. 2, 2013.

President Xi Jinping addressed the third construction symposium on the Belt and Road Initiative in Beijing on November 19th  marking the eighth anniversary of the BRI. Speeches were also given by He Lifeng, director of the NDRC; Chen Quanguo, the head of the Xinjiang Uighur Autonomous Region, and several other economic experts. After listening to the speeches, Xi made his own extensive comments on the importance of the Initiative.

President Xi Jinping reported that as of August 2021, some 170 nations and international organizations had, in various ways, cooperated with the BRI. Now today, in terms of combatting the pandemic, 110 of these nations have received some of the 1.7 billion doses of vaccine.

Xi stressed three aspects of the BRI, regarding infrastructure, speaking of “hard connectivity,” “soft connectivity” as an important support for this, and the “heart to heart” connectivity established by the Initiative in the important people-to-people relationships. “Through the joint construction of the Belt and Road, the level of opening up in various regions in the country has been improved, the areas of opening up to the outside world have been expanded, institutional opening up has been promoted, a wide circle of friends has been built, new ways to promote common development have been explored, and the construction of the country has been realized on the basis of mutual benefit,” Xi said.

While stressing that the general direction of the BRI will continue in an era still focused on peace and development, he also underlined the difficult situation facing the BRI in light of “the major changes unseen in a century” which he said are now “accelerating.”

He said, “The fierce competition brought about by the new round of scientific and technological revolution and industrial transformation is unprecedented…. Global issues such as climate change and epidemic prevention and control have an unprecedented impact on human society. The international environment of the Belt and Road Initiative is becoming increasingly complex. We must maintain strategic determination, seize strategic opportunities, coordinate development and security, coordinate domestic and international cooperation and struggle, coordinate reserves and increments, plan with a view of the whole as well as an eye on the details, actively respond to challenges, seek advantages and avoid disadvantages, and move forward courageously.”

He pointed to new areas into which the BRI must expand, namely, digital, health, green economy and innovation. “It is necessary to comprehensively consider and plan to build a new development pattern and jointly build the Belt and Road, focus on new areas of strength, and shape new points of integration. It is necessary to speed up the improvement of distinctive, complementary, smooth and safe land passages, optimize the maritime layout, and provide strong support for smooth domestic and international double circulation. It is necessary to strengthen the smooth connection of the industrial chain and supply chain, and promote the diversification of sources. We must build iconic projects of high quality. The people’s livelihood project is an important way to quickly increase the sense of public gain in the joint construction of a country. We must strengthen overall planning and form more grounded and united cooperation results.”

He also stressed the need to proceed forward with an eye on protection against the epidemic and possible security threats. He encouraged all of the provinces to begin consideration of how they can contribute to advancing the BRI.

The Belt and Road Institute in Sweden (BRIX), although only three-years old, has provided a great amount of precise and objective information about the BRI through its website, social media channels, and seminar / webinars hosting experts, diplomats, academics and businesses from all over the world. The BRIX will continue to monitor the developments around the BRI and bring to its readers and followers accurate and objective information in this new and shifting global situation.

Read the BRIX special report on the BRI