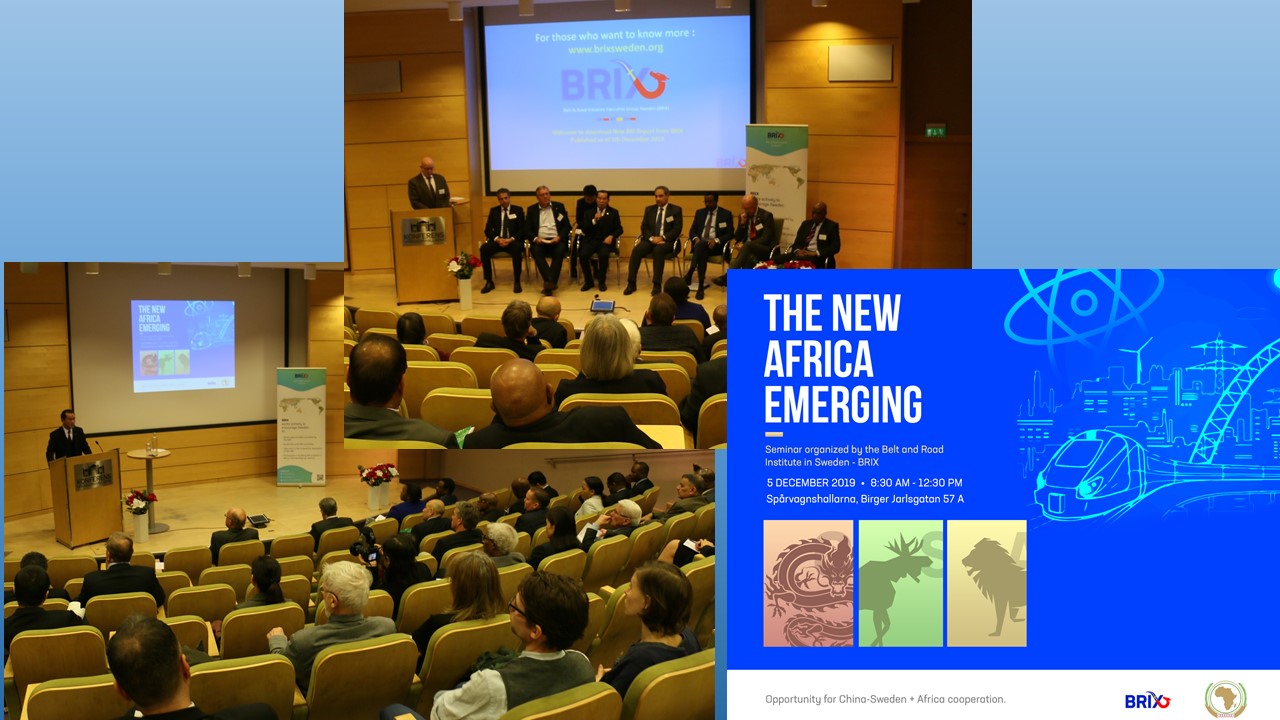 The New Africa Emerges along the Belt & Road

Top diplomats from the African Union joined the Chinese Ambassador to Sweden and the Belt and Road Institute’s (BRIX) members in a special seminar on December 5 in Stockholm to outline the great progress being achieved in realizing Africa’s development goals in the context of the Belt and Road Initiative (BRI). However, the seminar’s more important aspect was to explore the massive potential imbedded in making Africa the greatest economic powerhouse on the planet in the coming decades and how Sweden, Europe and China can cooperate with the African nations to accelerate and benefit from this promising perspective.

The seminar was initiated by Stephen Brawer, Vice-President of BRIX and moderator of the event. He welcomed everyone and gave a brief history of how BRIX came into being, and about its two other very successful seminars in 2019. The BRIX, which is only one year old, emerged out of a high-level seminar on the strategic and economic impact of the BRI held in May 2018 and organized jointly by the Schiller Institute and the China-Sweden Business Council (CSBC). He emphasized that BRIX works to disseminate knowledge of BRI as a global development process, and to present facts and knowledge based on deeper reflections, and not on superficial opinion based on prejudice and geopolitical agendas. Thus, BRIX believes that in the future, disinformation and propaganda that are spread in Sweden against BRI should be addressed in a more clear and assertive way.

Egypt’s ambassador, Mr. Alaa Hegazy, gave the welcoming speech as representative of the African Union (AU), since Egypt is the current Chairman of the AU. He emphasized the importance of the Belt & Road Initiative for the implementation of Africa’s development plans that have been around for a long time and lacked only the construction starts. He presented the AU’s Agenda 2063 plan for a continental rail and road network, electrification and industrialization. Ambassador Hegazy explained that the AU has several cooperation mechanisms with the EU, UN, Japan, etc., but cooperation with the BRI has been the most dynamic and effective of these mechanisms.

The ambassador of the People’s Republic of China to Sweden, Mr. Gui Congyou gave the keynote speech of the seminar in which he gave a detailed picture of the extensive cooperation that has been established between China and Africa in the context of the BRI. Ambassador Gui referenced the September 2018 Summit of the Forum on China-Africa Cooperation (FOCAC) in Beijing and the results of that summit. He said: “China-Africa joint construction of the “Belt and Road” initiative has accelerated, and 40 African countries and the AU Commission have signed cooperation documents with China on the “Belt and Road” initiative. We have formulated a country plan based on the actual needs of Africa. We will implement a total of more than 880 China-Africa cooperation projects in the next three years.”

Concerning Chinese-Swedish perspectives, the Ambassador stated: ”The Swedish government has many aid and cooperation projects for Africa, and many large Swedish companies such as Volvo, Scania, and ABB have extensive operations in Africa. China is willing to work with other countries in the world, including Sweden, to complement each other’s strengths and make positive contributions to peace, stability and development in Africa.”

Ethiopia’s Ambassador, Mr. Deriba Kuma showed the audience how Africa’s plans for modernization and industrialization are being implemented. Ethiopia is well on its way to realizing its plans to become a middle-income country by 2025, transitioning from an agricultural-based society to an industry-based one. “Ethiopia is a major beneficiary in the Belt and Road Initiative. Since the country has embarked on expanding its infrastructure network across the nation like roads, railways, telecom and airports; the technical as well as financial support from the Government of China side has helped a lot”, Ambassador Deriba said. He added that “Ethiopia, through its vision of becoming a middle-income country by 2025, has launched an ambitious plan of constructing twelve industrial parks across the nation. Major Chinese companies have participated in the construction of these industrial parks and even some Chinese companies are constructing their own industrial parks in Ethiopia.” He emphasized that “Ethiopia has a plan to have 30 industrial parks by the year 2025. I hereby would like to call up on those competent companies to actively engage in this endeavor either through constructing the industrial parks or by leasing the sheds that could help them to participate in manufacturing of different products.”

Ambassador Kuma also reminded the audience that his country’s Prime Minister, H.E. Dr. Abiy Ahmed, will be receiving the Nobel Peace Price next week. This is an appropriate recognition of the path Ethiopia has taken towards social, political and economic reform.

South Africa’s Chargé d’Affaires, Duncan Sebefelo discussed his country’s economic visions and plans, and the challenges and opportunities that exist today. He referenced the major investments China has made in key projects in his country. After the turn of the year, South Africa become the chairman of the AU, outlining the philosophical principles that the AU has for the economic cooperation projects. Mr. Sebefelo explained how important the BRI is for the development goals of the African continent.

The board member of BRIX, Hussein Askary, made a thorough presentation on “retooling Africa’s rise”. With the help of charts, pictures and maps, he showed how BRI is helping in realizing Africa’s goals. He emphasized that BRIX does not exist to cheer on China or Africa, who can take care of themselves. BRIX’s goal is that Sweden should be part of this process of cooperation and not miss the train towards economic prosperity and stability in the world. In order to achieve that, Sweden’s and Europe’s attitude towards Africa has to change first. He contrasted this attitude to that of China. While Sweden and the Eu considered Africa “a problem”, China considers Africa “an opportunity”. Askary explained that a major part of this problem is the “aid” mentality. He argued that the Chinese way of “empowering rather than helping”, which is to supply Africa with the “tools” for development such as infrastructure, industrialization and technology transfer is the most suitable for Sweden and Europe to follow. Under the heading “SDG acrobatics” (Sustainable Development Goals), he talked about how Sweden and the EU are redefining the UN development agenda in 2030, so that the most important priority goals to be addressed (poverty, hunger, healthcare, electricity education, water, industrialization, etc.) are placed at the bottom of the priority list, while Climate Action, goal no. 13, is at the top. In conclusion, he explained that with the help of China and the BRI, Africa is well on the way to realizing its Agenda 2063. But he asked how faster can this agenda be realized if Sweden and the EU contribute to it?

The Norwegian former member of parliamentary, and co-founder of Ichi Foundation, Mr. Thore Vestby, talked about the Norwegian cooperation with Africa, which has been largely restricted to aid through NORAD. But a new focus on cooperation has been established in 2012 through the Norwegian African Business Association by leading Norwegian companies (norwegianafrican.no). Norway also needs to establish cooperation with BRI, Vestby emphasized, and a shift in the attitude in Norway towards China and the BRI is necessary. He congratulated the Swedish BRIX for its successful work and announced that a “BRIX Norway” will be started in the new year.

BRIX member and private consultant, Mr. Lars Aspling, explained in his presentation that now 16 of 28 EU countries have already signed agreements (MOU) with China to cooperate with the BRI. This shows that such an agreement, or even a mere positive opinion on BRI, as France and Finland have expressed, need not necessarily to divide the EU. Although the Swedish government, with its proposal for a new China strategy, adheres to EU policy, there are, thus, no legal issues that hinder Sweden from joining the BRI. But only a lack of political will stands in the way, he stated. Aspling gave a tour of the necessary investments that need to be made in northern Europe, Scandinavia and Sweden to be able to rise to the levels of productivity necessary in the new BRI era.

Aspling seized the opportunity to announce that a new report that BRIX has just published about what BRI on the importance of Sweden’s cooperation with the BRI can now be downloaded from the BRIX website.

The seminar’s moderator, Stephen Brawer, led the closing panel debate where the speakers answered questions fielded by the audience. BRIX chairman Ulf Sandmark commented on the question and discussion about corruption in Africa by pointing out that BRI has a focus on real investments that are not handed over as sums of money like the investments made by the West. The BRI investments are delivered as cement, steel, machinery and input products for the projects. “Cement is difficult to put into a bank account, which means that BRI has an intrinsic mechanism to prevent corruption,” he said.

In closing the seminar, moderator Stephen Brawer again emphasized the need to present fact-based information and knowledge about BRI, and made a point of thanking the effort that TV100 and Fredrik Vargas make through their important work in reporting the proceedings of this seminar.

19 diplomats from 15 countries (mostly from Africa) participated in the seminar which was attended by 60 guests.

All the speeches and discussions panel will be posted on the BRIX website (www.brixsweden.org) and social media outlets. 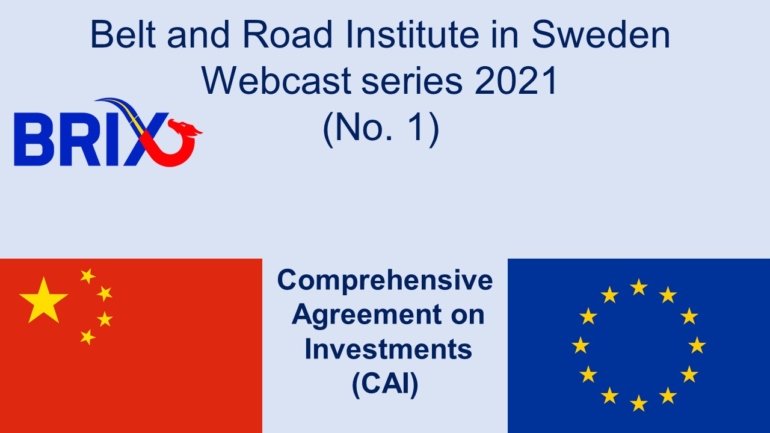 brixswedenJanuary 26, 2021
The Belt and Road Institute in Sweden (BRIX) has launched a new feature of its activities through a series of webcasts and podcasts addressing the…

brixswedenJanuary 21, 2021
When covering the Belt and Road Initiative (BRI), one of the regions that is not receiving enough attention in the European and Swedish media in…

brixswedenJanuary 17, 2021
Updated list of BRI member-states (2021) The Belt and Road Institute in Sweden (BRIX) has assembled an updated list of nations that have joined the Belt…
Learn More