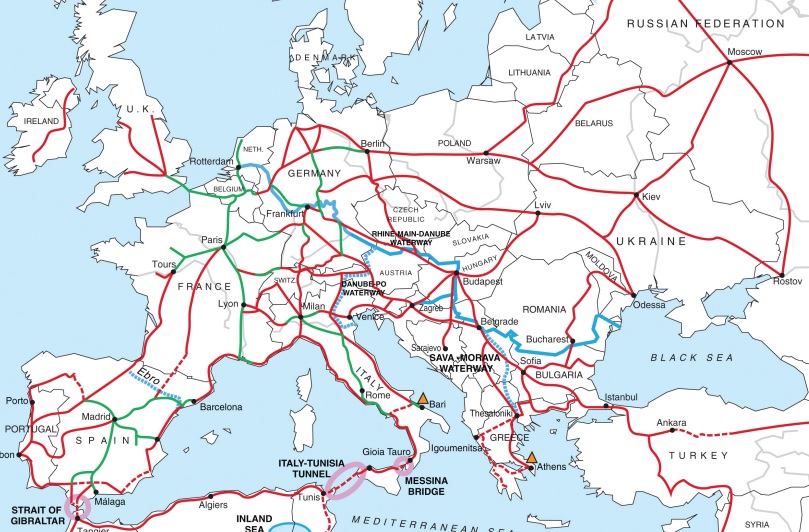 The Belt and Road in Europe: Between Tragedy in Ukraine and Hope in Serbia

Before the launching of the Russian military operation in Ukraine on February 24, and even in the following two weeks, freight transport on the China-EU Express railways was reaching overcapacity and congestions were developing in several points, especially at the Belarus-Poland crossing. However, after three weeks of the operation and a series of new sanctions imposed on Belarus and Russia by the European Union reality along this Belt and Road Corridor changed dramatically. In 2020, the rail freight along this route reached a record 12,406 trains travelling both directions. When this corridor was used for the first time for commercial freight in 2011, only 17 train trips were registered that year. (See BRIX interview with specialist Huilin Shi).

According to the specialized website Railfreight.com, discussions with specialized companies in the rail freight activities between China and Europe along the China-Europe Express, in addition to research conducted by BRIX indicated the following:

The major freight and forwarding companies are going back to the sea freight routes between Asia and Europe, especially through the Mediterranean and Suez Canal to the Indian Ocean and South China Sea. This is the safest and quickest alternative to shift freight to since the logistics and other mechanism have existed for decades and do not need to be created. But prices will rise even more. For companies that need to save time on shipping high value / low weight and size products, a combination of sea plus air transport is chosen. This adds a big cost to the process but ensures delivery in time. To save some time, certain shipping companies use the southern Mediterranean ports like Piraeus in Greece, Trieste in Italy, and Algeciras in Spain and then rail and roads to northern Europe. The Arctic Northern Sea Route is not yet developed into a year-round sea lane due to ice build-up between November and May. Although Russia has developed and used a number of nuclear icebreakers, the volume has been limited. Using Russian icebreakers and Russian logistics and navigation systems in the that region also poses a problem due to sanctions and political complications.

Middle Route: The Eurasian Middle Route, which goes from Western China to Kazakhstan then across the Caspian Sea to Azerbaijan, Georgia, and Turkey, although has potential, it cannot even remotely fill any gaps created by the blocking of the Northern Route.

One company from Gansu (China Wuwei Bonded Logistics Center) is using this Middle Route for shipping goods to Europe through either Turkey and Bulgaria by rail, or to the Georgian port of Poti, then across the Black Sea to Romania’s port of Constanta and further by land to Hungary. But the volumes on this route are very small (3% of the total China-EU freight and one train trip per week compared to 30 per day (!) on the Northern Route). Besides, timewise, the trip to Georgia alone takes 20 days, which is very long compared to 12-14 days for the whole trip from China to Western Europe. There is need for massive upgrading of infrastructure and cross-border customs and handling systems before this route becomes a contender in the BRI. Therefore, this is not an alternative neither in the short term nor long term. But it is a great complementary route if fully developed.

The China-EU Express, although not physically affected by the fighting in Ukraine and still operational and is exempt of the sanctions, it is being practically blockaded by many Western European clients. Political pressure might even force cargo handlers and trade unions on the EU side to stop handling containers coming from China through Russia and Belarus. The only hope is if the military operations in Ukraine end and a certain level of normalization is reached between Russia and the EU nations through diplomacy. This would immediately restore the traffic to the China-EU Express, because it is indispensable for all sides. In the meantime, the supply chains between East and West will suffer from logistical problems.

As the BRIX noted repeatedly, the BRI is not a mere trade route but a global development program. Even in Eastern Europe, near the conflict in Ukraine, the BRI continues to achieve good results. We take the case of Serbia here.

On Saturday March 19, the Prime Minister of Hungary Victor Orban visited the Serbian capital Belgrade and joined the President of Serbia, Aleksander Vucic and took the maiden trip of the first high-speed train in Serbia from Belgrade to Novi Sad. The completed 75-kilometer-long railway is one section of the BRI project which will connect Belgrade to Hungary’s capital Budapest. The total line will extend 184 kilometers in total and will reduce the travel time between the two European capitals from 8 hours to 3 hours. This US$370 million project is undertaken by the China Civil Engineering and China Railway.

The railway is one of many projects financed and built by China in the context of BRI cooperation with Serbia which includes roads, power plants, steel plant, bridges, and other infrastructure projects. Both Serbia and Hungary are members of the 16+1 forum of China-Central and Eastern European Countries. China and the 16+1 countries have many similar BRI projects which will connect the Mediterranean at Piraeus in Greece through the Balkans to Central and West Europe.

Serbia was the largest recipient of Chinese outbound direct investment among the 16+1 group in 2019. Most of the Chinese investments are concentrated in infrastructure projects.

Among the major infrastructure projects financed and built by China are, besides the railway above:

Besides infrastructure Chinese companies have invested in large industries such as copper, steel and tire factories.

China and Serbia are negotiating a Free Trade Agreement that is expected to be signed by the end of 2022. This will increase the volume of trade between the two countries dramatically.

President Alexander Vučić, and President of Poland Andrzej Duda were among the few European leaders who visited Beijing during the Winter Olympics 2022 and held talks with President Xi Jinping on matters related to the Eurasian express rail connection and the importance of enhancing the connectivity through rail and building logistics hubs in Poland. Poland has become one of the bottlenecks in the China-EU Express and needs investments in rail infrastructure to cope with the rising volumes of freight.

Serbia is emerging as a major economic partner of China in the Balkans and Eastern Europe. But this is not an isolated country nor a separate policy of China. This is integral to the expansion of the BRI cooperation in a region which has been basically abandoned by the EU and the U.S. in terms of investments in infrastructure and regional connectivity. In reality, China is doing the EU and Europe a favor by connecting this region together to the Mediterranean, Adriatic, and the Black Sea. Many of the “European Corridors” in this region are standing still with lack of financing and capacity to construct. China is filling a major gap in the connectivity of the European continent.

Peace through economic cooperation should become the norm for modern diplomacy and international relations. The BRI has shown its potential to bridge political, cultural, and social differences.

Is the Belt and Road Initiative a Target in the Unrest in Belarus? (August 2020)