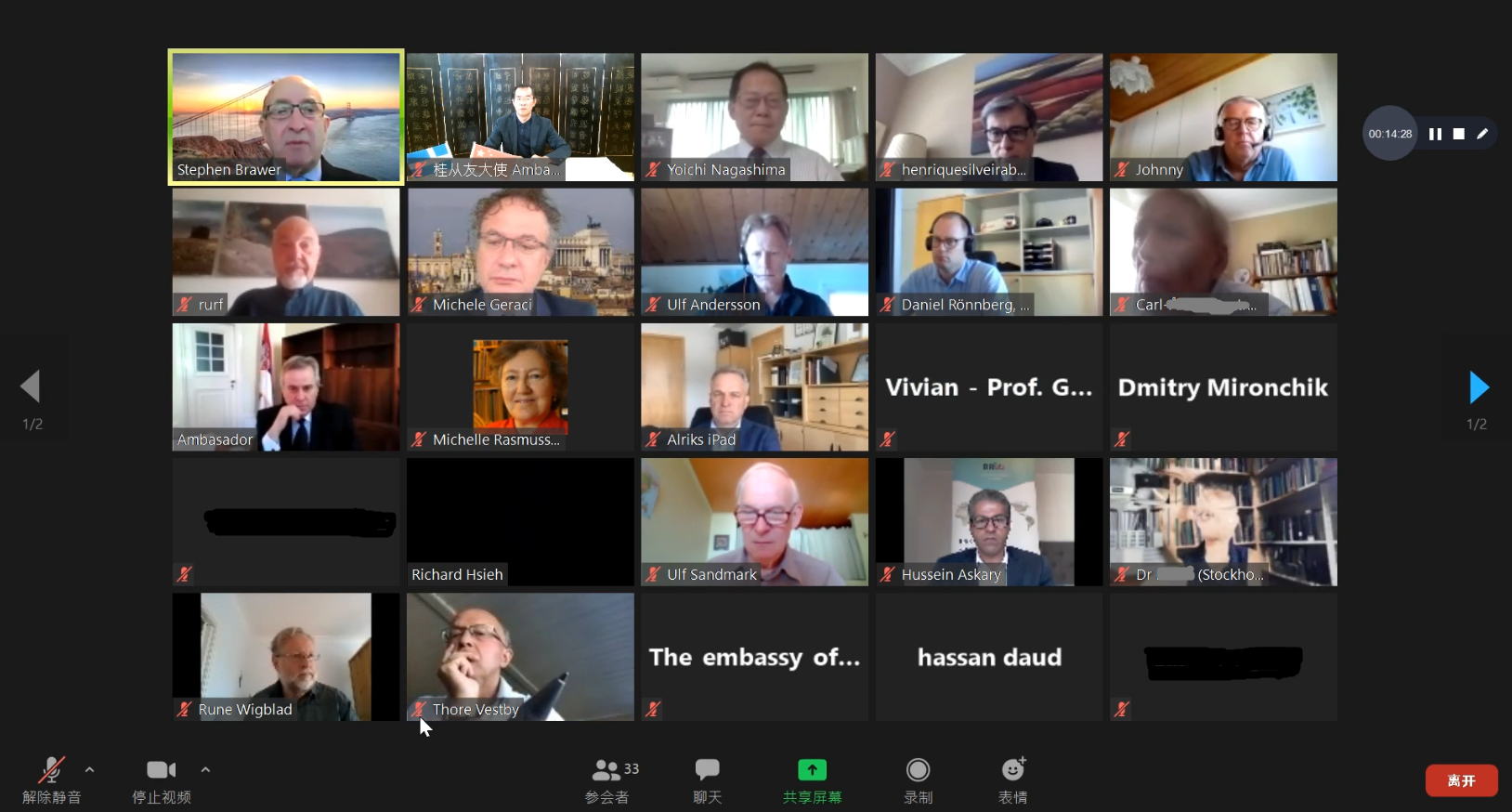 Webinar: Europe-China cooperation along the BRI in Northern Europe

In an extraordinary webinar, held on June 11, senior official and unofficial representatives of China, Italy, Portugal and Serbia discussed the issues related to cooperation along the Belt and Road Initiative (BRI) with Swedish and Nordic strategists, logistic experts, businessmen, and political representatives. The timely full-day webinar mobilizing for a post-Corona strategy for economic recovery, was organized from Stockholm by the Belt and Road Institute in Sweden – BRIX under the title: “Will the Sovereign Nations of Europe Understand and Act to Realize the Benefits of the Belt and Road Initiative (BRI) in 2020?” Stephen Brawer, Vice Chairman of BRIX, was the initiator and moderator of the webinar.

Ambassador of People’s Republic of China Mr. Gui Congyou was the keynote speaker reporting on how the China-Europe freight trains had become a lifeline during the Corona crisis and the increase of Chinese investments in global health security in the BRI-countries, especially in Africa.

Attending the webinar was also the CEO of the Swedish company SKF, Alrik Danielsson, who reported about the commitment of his company for open trade and continued investments in China.

Ambassador Henrique Silveira Borges of Portugal underlined the importance of multilateral cooperation as a cornerstone to prevent tension and combat poverty, which is the policy of his country in the upcoming EU-China Summit in the end of June.

Ambassador of Serbia, Dragan Momcilovics, said that, while pursuing the EU-membership application, Serbia is using the opportunity to cooperate with others. He reported about the importance for Serbia of Chinese industrial investments, which he said had been almost as big as in Sweden.

Professor Michele Geraci, Economist and Expert in Chinese Economics, former Undersecretary of State at the Italian Ministry of Economic Development contributed with his experiences from the signing by his Italy of the Memorandum of Understanding with China to take part in the BRI. He emphasized that while there was much criticism from political corners, the business community and industrial sector welcomes such initiatives.

Rune Rafaelsen, Mayor of Sör-Varanger, Kirkenes at the very top of Norway brought the webinar right into the Nordic realities with his speech about the “Arctic policy- Cooperation with Russia and China to Develop the Northern Sea Route”.

Ms. Wang Tianshu, the CEO the newly established Swedish subsidiary of the giant Chinese tunneling company CRTG Engineering, reported to the wenbinar attendants about the CRTG projects to bring people together in many countries around the world and the work in Stockholm to build tunnels for the expansion of the subway system.

The CEO Plantamed, Nagashima Yoichi, from Eskilstuna reported about the successful cooperation to launch the Chinese traditional medicine from Sweden into Europe and even back into China.

Hussein Askary, Board Member of BRIX introduced the scientific principle for economic development under the title “Recovering from COVID-19 Economically: Lessons from China Post-2008 Crisis Strategy”. Askary emphasized that despite differences in cultural, political and social systems among nations, if we all look deeper into the best and greatest times in our history, we realize that we are quite similar in our approaches and values. He called for a new mechanism of financing and building infrastructure and development projects whereby all nations from East and West agree on specific principles, like in the 1944 Bretton Woods Conference. (See powerpoint presentation: Askary-presentation-20200611)

In the afternoon panel (Watch video) Ulf Sandmark, Chairman of BRIX delivered the keynote: “A New Deal for Northern Europe” pulling together the huge projects that could gear up the Nordic nations to face the challenge of contributing to the Global Health Silk Road and the global infrastructure development program of the BRI. The first of the Four Nordic Corners Projects has already been launched by the Danish government by initiation of the huge Fehmernbelt tunnel project between the Danish islands and Germany.

Ulf Andersson and Mr. Daniel Rönnberg from INAB Infrastructure in Umeå elaborated the projects for development of the Logistics in the North of Sweden.

Alf S. Johansen, Secretary General of Vaermland-Oestfold Border Council elaborated a plan from the Norwegian side to build the “Transnordic High Speed Railways, Bergen-St. Petersburg—5 hours”. The plan would integrate the main cities and capitals of the Nordic Countries into a dynamic cityregion, which would be connected to St. Petersburg and Moscow and further on to China.

In the discussion period professor Rune Wigblad pointed to the benefits of the maglev technology now rapidly being expanded in China. Watch Q & A session of the second panel here!

The Senegalese businesswoman Isabelle Hannouche, Managing Director of Teranga Trade in Shanghai, presented her projects to bring together creative young people from both Africa and China in networks for taking on projects and entrepreneurship. Giving a model of how young people can be inspired in China, Africa as well as in the EU to take on the challenge of building the BRI.

Finally, Stephen Brawer, Vice Chairman of BRIX concluded with a presentation on how to overcome the geopolitically motivated resistance to the cooperation for common aims of mankind.

The very successful seminar was attended by 40 participants in the morning panel and 30 in the evening.

All the proceedings of the webinar (speeches, presentations and discussions) are now available on the BRIX YouTube channel.