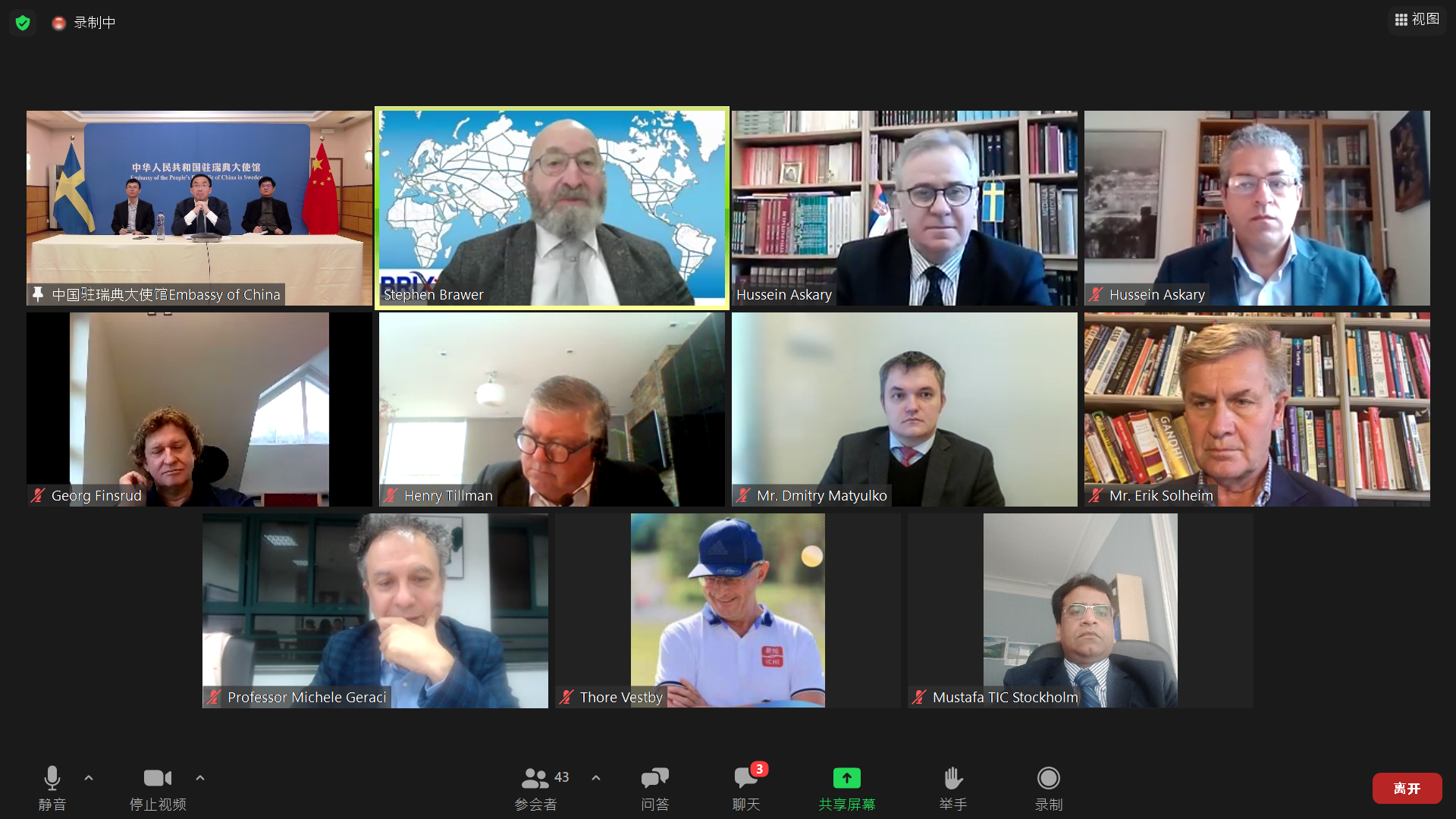 Report on the Green Belt and Road Webinar

A clean environment, economic prosperity and human rights are usually treated as separate issues. The webinar organized by the Belt and Road Institute in Sweden (BRIX) on November 10 to discuss the Green Belt and Road set out to explore how these matters, although intertwined, could all be included as elements in a method of developing a society to moderate prosperity for nations worldwide. The persisting major disagreements between the views expressed by certain governments and institutions in the West especially, and those of developing nations, could thus be resolved.

Mr. Zhang Biao, Charge d’Affaires, Embassy of The People’s Republic of China, in his Opening Speech he explained:

Development of human conditions is key for the environment. The Chinese poverty alleviation is a guiding post for all the world going hand in hand with environment. Of the Three Green philosophies of China No 1 is: “The Green concepts drive the sustainable development” where “Mankind and Nature form a Community of Life”.

A clean and sustainable environment means a developing economy, one that includes industrialization and modernization, and one that successfully eliminates absolute poverty worldwide. President Xi, April of 2021, said: “Climate issues should not be taken over by geopolitical objectives”, and that it is through scientific and technological progress and innovation China will reduce its emissions without compromising the transition of its entire population from a society of moderate prosperity in 2021, to a fully prosperous society in 2049.

Promoting the Green Belt and Road will bring sustainable development and create more opportunities for the world according to the No. 3  green philosophy of China: “Green Cooperation for Win-Win benefits”, he continued. There he also pointed to the Green Cooperation with Sweden, with its rich experience and active businesses, its Bio-Cities and Environmental engineering. China has a huge need for Green businesses, Mr. Zhang concluded.

H. E. Mr. Dragan Momcilovic, Ambassador of Serbia to Sweden reported that Serbia with a population of seven million is developing fast with three billion in Foreign Direct Investments and a 6 percent growth. At the same time the Environment is improving.

The main foreign policy goal of Serbia is the EU membership. However, EU is not ready for enlargement as can be seen for instance with the example of Slovenia. This gives Serbia breathing space to further develop in sovereignty. China is now an important partner for Serbia, Ambassador Momcilovic said.

Mr. Dmitry Matyulko, Charge d’Affaires, Embassy of Belarus to Sweden said that Belarus is an important part of the Belt and Road as one million tons of its cargo pass through on the railways. The route from China is the shortest to Sweden, Mr. Matyulko said.

The Great Stone industrial park close to the Minsk airport is the biggest Special Economic Zone directly on the Northern Corridor of the New Silk Road trade route. Now 80 companies have settled there, now among them also one Swedish company, Mr. Matyulko reported. The Great Stone is developing into a Smart Ecocity for a population of 130.000 residents in the future.

The Commercial Counsellor of the Embassy of Pakistan to Sweden, Mr. Ghulam Mustafa stated that the BRI is normally considered as an infrastructure project, which however includes much more, such as: policy coordination, trade, financial integration as well as transport along the shortest transport route to the harbor. “Pakistan is a vibrant partner of the BRI”, Councellor Mustafa said, with many designated Special Economic Zones where half of them are fully operational.

Erik Solheim Former Member of the Norwegian Parliament, Former UN Under Secretary General and former Executive Director of the UN Environmental Program emphasized that China´s investment policy is more important than the issue of coal. With 130-150 nations, who are all developing nations in the world, the BRI is the biggest development framework in the world. “The Western scheme is just an idea. BRI is the real Global Coalition for a Green World”, Mr. Solheim said calling it “the biggest driver for development in the world.” He said, “China is a driver of Green technology” and pointed to how China has 70 percent of HSR in the world, that half of the metros in the world are in China and how EV has 60 percent of the market in China, bringing more green business to the EU partners.

“China is leading the greening of the world”, he continued pointing to the tree planting in China now being in the size of Belgium per year. It is leading the launching of natural parks according to president XI´s concept of a “Beautiful China”. Last year China succeeded in lowering pollution, so that now in cities the pollution is the same as in Europe or lower. China now has some of the greenest cities in the world. China is first in history with a win-win policy where there is no more a choice between development and environment, Mr. Solheim reported.

Professor Michele Geraci Former Undersecretary of State at the Italian Ministry of Economic Development pointed to the green policy as a basis for a bottom-up approach where you could do the right thing and make money and at the same time not run out of fuel.  He said: “China and the West do not understand each other”. China needs to fix access to market and reciprocity. The EU brings up HR, forgetting in Belgium about its history of HR or in Italy. “Keep the issues separate”, he underscored. “On Climate Change: Do not point finger! Find way to the emerging market of six billion people in Asia-Africa to get development.”

Henry Tillman, Founder and Chairman of the China Investment Research talked about Greening the BRI via Technology and Innovation, focusing on the ongoing major projects of LNG (Liquified Natural Gas), HSR (High Speed Rail) and MSR (Molten Salt Reactor). He pointed to the huge development of LNG in the Arctic, where now seven nations work in Russia bringing this year USD 1,1 bn of LNG to EU and USD 2.2 bn to Asia. He said that emissions from world shipping sector, if it is regarded as one nations, would be the 6th largest contributor to CO2 emissions. China in September tested an MSR fueled by Thorium. Bill Gates work in UK with Terrapower to launch MSR on ships by 2028. The world needs common projects, he said.

Georg Finsrud, CTO, Scanwater Technology is an engineer and System Integrator at SIEUGreen.eu. He explained the huge potential of treating water in an integrated system to reuse it for the different purposes. It is an EU-China project working since 20 years with a base in the Scandinavian countries, as well as in Changsha in Hunan, China.

Hussein Askary Member of the Board for the Belt and Road Institute in Sweden took up the issue of development vs climate. “All nations have the responsibility to raise all populations out of poverty. Glasgow is putting development aside, arguing that ‘we don’t have time’”, he said and pointed to poverty alleviation as the priority of the UN Agenda 2030 Sustainability Goals, something which is obscured in the West by what he called Agenda 2030 Acrobatics putting climate first. He said, “the aid-based system has kept the colonial structures in Africa. Therefore, the modern development model, like China´s, is more attractive.” The Belt and Road Initiative is therefore the most suitable platform to bring together Europe, the USA, and China to work together in Africa, Asia, and Latin America.

Stephen Brawer Vice Chairman of the Belt and Road Institute in Sweden in his presentation he addressed the Chinese concept of “Harmony in Nature in the Green Belt and Road” comparing it to the philosophy of the universal and European thinker and scientist Gottfried Wilhelm Leibniz. Brawer reviewed the correspondence that existed at the 17th and 18th centuries between Europe and China to examine whether Chinese natural philosophy was compatible with Christina philosophy. Leibniz was of the view that Confucian philosophy of harmony was compatible. What the reviewing of such a history of ideas leads us to is the creation of a common understanding of the nature of man and that of the universe between seemingly different cultures. This can help in bridging the differences between East and West and bring nations together to an understanding of the concept of a “community of a shared future for mankind”.

The proceedings of the webcast can be watched in full, including the lively Q&A sessions here: