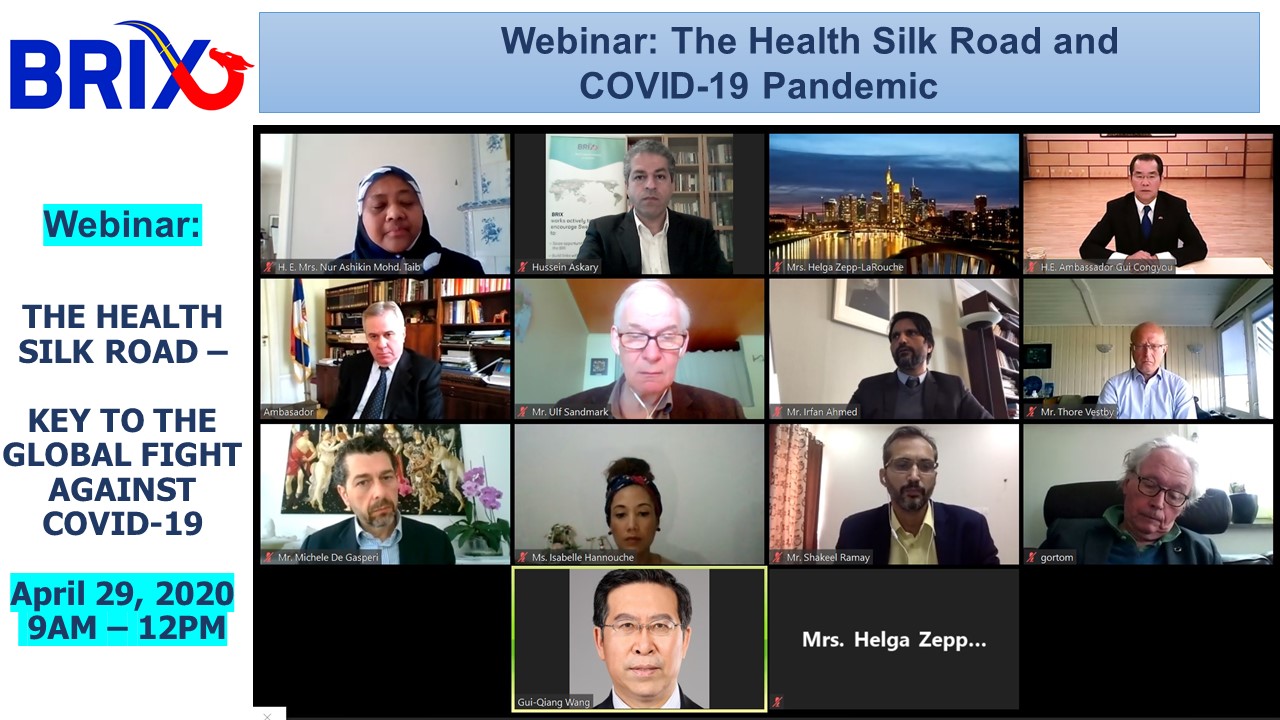 The full recording of the webinar is available on the BRIX YouTube Channel!

The Belt and Road Institute in Sweden (BRIX) organized an extraordinary webinar was held in Stockholm, Sweden on April 29, 2020, pulling together Ambassadors, healthcare specialists, economists and think tankers from 12 countries to discuss the role of the Health Silk Road and Belt and Road on building a global healthcare front line against COVID-19 pandemic and other epidemics and diseases.

The webinar started with an opening statement by the moderator of the event, Hussein Askary, Board member of BRIX, in which he reviewed the effects of the Corona Pandemic on the world, and the importance of the Health Silk Road to create a global front line against it. He reviewed the history of the Health Silk and its relationship to the Belt and Road Initiative. He emphasized that developing an adequate physical infrastructure, in addition to education and scientific research are main components of the global healthcare system that was envisioned by the Health Silk Road in an international conference in Beijing in August 2017.

The first speaker was the ambassador of the People’s Republic of China, Mr. Gui Congyou. He thanked “BRIX for providing this online platform where we join each other for timely communication on battling COVID-19 and improving cooperation.” Mr. Gui emphasized that “from a historical angle, a pandemic could happen at any corner of the world, and the history of humanity is a history of battles against various plagues and prevailing over them. We are confident that COVID-19 is another that will be defeated.” He said, “The Chinese government, despite facing a challenging situation itself, has been providing assistance in medical supplies to over 150 countries and international organizations, including the World Health Organization and the African Union.” (Full transcript of the speech below.)

Ambassador of Serbia Dragan Momcilovic told that the COVID-19 pandemic had been largely controlled in his country because China came to rescue. Not only with protective gear but also with ventilators and most importantly Chinese doctors came to Serbia with advice on how to handle the virus. Ambassador Momcilovic also emphasized the importance of the role by the Belt and Road Initiative and China’s transport, power and industrial projects in reviving the economies of the eastern European countries. He also urged the EU and the U.S. to join hands with China to build the world economy and help fight pandemics.

Ambassador of Malaysia Mrs. Datin Paduka Nur Ashikin Mohd Taib stressed the importance of international cooperation to handle the virus as it is a global phenomenon. “On the bilateral level Malaysia has received a lot of help from China in terms of equipment and experts”, she said. “It is time for cooperation and definitely not for competition.” … We have to find ways to come through this as a global community”, she ended.

Mr. Irfan Ahmad from the Embassy of Pakistan said that “COVID-19 proves indeed that the world now is a global village and, whether we like it or not, individual countries cannot stay isolated from each other anymore”. “The Government of Pakistan looks at it as a challenge but also as an opportunity to mitigate health problems in third world countries. The Pakistan Prime Minister has called for a global initiative for debt relief and in consultation with the UN, will call together a group to look for a comprehensive solution to the debt problems resulting from the COVID-19 situation. Domestically Pakistan has launched a nine-month program to build the health system and launched the largest program to aid the poor and marginalized people with financial support. 1800 three-and-four-star hotels in the country has been turned into quarantine centers for COVID -19 patients. 2000 hospital beds have been created in sleeping trains. The international cooperation with China in line with the Health Silk Road is strong.

Prof. Wang Gui-Qiang is one of the absolutely top experts on COVID-19 in China as a member of the medical treatment expert group of the National Health Commission, and in his participation in the compilation and updates of the Chinese COVID 19 diagnosis and treatment protocols. He provided the latest experiences from the China about the diagnosis and treatment of COVID-19, covering many issues not sufficiently clarified even among international experts. (See video and slides of his speech.)

Swedish Prof. Goran Tomson made a strong appeal for cooperation among all countries against the virus. In the name of science, he sharply refuted the politicization dividing nations in the struggle. He pointed out the importance of the existing cooperation within the WHO, for which he is an advisor, and the many initiatives in which the Karolinska Institute is taking part. Especially significant for the promotion of the Health Silk Road is the work on the UN Agenda 2030 at the president’s office at KI, to which he is the counsellor. Also very important, is the international cooperation to minimize emergencies and disseminate antibiotic resistance, in which he had co-founded the ReAct Network on antimicrobial resistance; INRUD, the International Network for Rational Use of Drugs; as well as the Sino-Swedish IMPACT.

The second panel, “The Role of the Belt and Road in Building a Global Health Front Line,” was keynoted by Mrs. Helga Zepp-LaRouche, founder and president of the international Schiller Institute, who took up the background to the threat of global pandemics in the economic policies going back to 1970ies. She provided a roadmap how to turn around the situation and establish a new paradigm among nations. She pointed to the need to implement an economic policy of credit for world development according to the Four Laws of Lyndon LaRouche and a New Bretton Woods. She called for a top meeting of the four major powers — United States, Russia, China, and India — to challenge the power of the old system of Wall Street and the City of London in order to implement that. She also referred to the recent Schiller Institute conference that emphasized the importance of establishing a “new paradigm” in international relations based on such mutual projects of economic development as the Belt and Road Initiative. Building a modern global healthcare system for all nations, especially in Africa, requires modern infrastructure, she added.

Thore Vestby, Former MP, Co-founder of ICHI Foundation, Norway, contributed some observations from a neighboring country that has followed a different pathway in how to fight the Corona virus. He pointed to the statement by the Foreign Minister at the Norwegian Atlantic Committee in early February said: “China is an indispensable partner”. The prime Minister Erna Solberg has taken the lead and the support from the parliament has been unanimous. To CNN she said: “Global problems has to be solved by Global Solutions.” Norway support and cooperate closely with WHO and has sent a medical team to support Lombardy, Italy. Now the situation is turned around and Norway is receiving a lot of help the Health Silk Road.

Michele De Gasperis presented the impressive activities of the OBOR Institute of Italy to involve Italian and Chinese business in international cooperation along the One Belt One Road/BRI. With seven offices, two in Italy and five in China, the OBOR Institute is coordinating an international network of think tanks and chambers of commerce developing the business opportunities of the Belt and Road Initiative.

The think tank expert from Pakistan Dr. Shakeel Ramay, Director of Asia and China Study Center, at the Sustainable Development Policy Institute, made a presentation on infrastructure development as one of the keys to build a real Health Silk Road. He explained the necessity of creating a multi-layered economic development model based on joint efforts by the private business and state institutions, but ultimately the responsibility for ensuring the resilience and sustainability of the development process must be shouldered by the state.

The young panelist and businesswoman Isabelle Hannouche from Senegal. Working as a China-Africa trade expert out of Shanghai, she had been active to direct Chinese aid for the coronavirus fight in her homeland. The lack of ventilators in Senegal and the high prices has prompted entrepreneurs there to start producing one that cost only 60 USD a piece, she told.

The final speaker was Ulf Sandmark, who reported on the cooperation between China and Sweden in the very advanced research in diagnostics and testing of the coronavirus. Robots for automated analysis of mass testing have been brought on a special cargo plane from China to Karolinska Institute/SweLifeLab. He said, this is a model of using innovation to leapfrog the methods of fighting Covid-19, along the lines of the Chinese strategy for using innovation as the core of the BRI development policy and bringing the world together on the basis of science.

The two panels were followed by a lively discussion between the audience and the speakers, covering a wide range of issues related to the Belt and Road and the Corona pandemic.