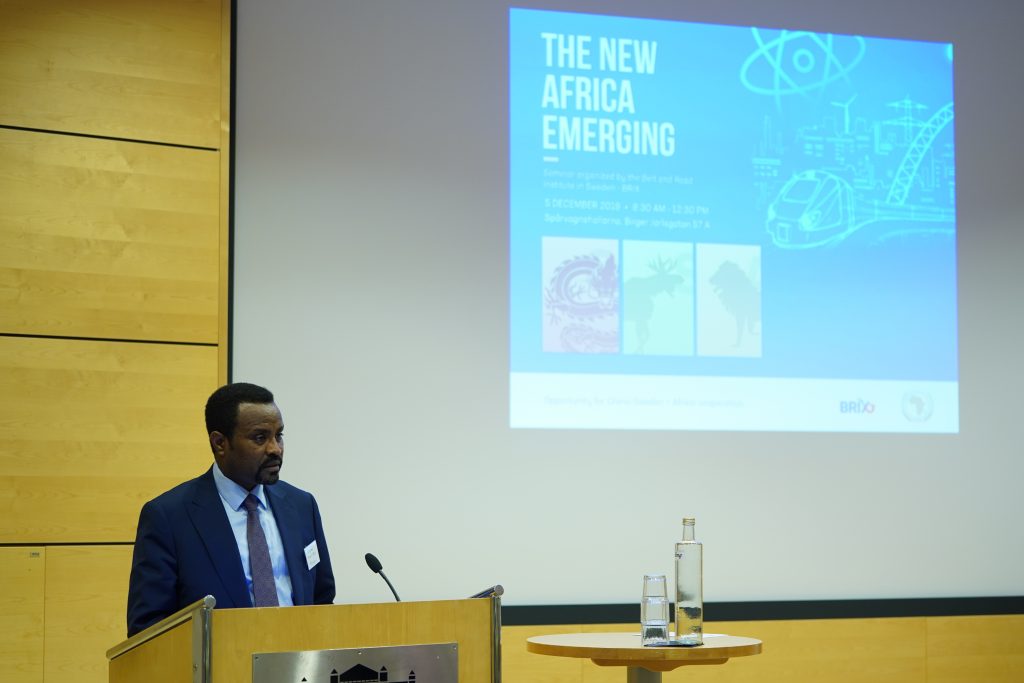 Speech by H.E. Mr. Deriba Kuma, Ambassador of the Federal Democratic Republic of Ethiopia to Sweden, in the BRIX seminar “The New Africa Emerging”, December 5, 2019.

First and for most, I would like to take this opportunity to express my gratitude to the Belt and Road Institute for inviting me to deliver a speech in this such a high-level forum.

I am delivering this speech at a time when my Prime Minister H.E. Dr. Abiy Ahmed had already won the 2019 Nobel Peace Prize for his achievements in breaking the 20 years no war no peace stalemate between Ethiopia and Eritrea and for his effort in making peace in the Sudan and the Horn of Africa region in general. The Nobel Prize Committee has also recognized the achievements of the Premier in domestic issues as well.

Ethiopia is currently undertaking massive socioeconomic transformation. On the political front it has widened the political space, freed political prisoners, amended draconian laws such as the charities and societies law, the media law and the anti-terrorism law that have stifled citizen’s freedoms of expression and association. On the economic side a major transformation is taking shape. It has been decided by the Government of Ethiopia to fully and partially privatize state owned enterprises and parastatals. Again, the Government of Ethiopia has recently formulated “Home Grown Economic Reform”. The basic tenets of the “Home Grown Economic Reform”, are to leverage the achievements of the last decade for high quality growth, the need to overcome emerging challenges and create new opportunities, sustaining the success of the past decade by correcting emerging macroeconomic imbalances, easing structural bottlenecks and creating new opportunities and sources of growth. Finally, the need to upgrade our policy and institutional framework so that to be able to take our success to the next level.

Ethiopia is a gate way for Africa. It is the seat of the African Union, the United Nations Economic Commission for Africa (UNECA) and over 100 embassies and international and regional organizations. It has a population of over 100 million of which 70 percent is the youth population. As mentioned above with a population of approximately 100 million and a rapidly growing middle-class society, Ethiopia is the second largest market in Africa, and is also part of the Common Market for East and Southern Africa (COMESA) comprising 19 countries and over 400 million people. The capital Addis Ababa is the main air hub for Africa and the home of Ethiopian Airlines, which has won repeated recognition as the best airline in Africa.

Ethiopia is a major beneficiary in the Belt and Road Initiative. Since the country has embarked on expanding its infrastructure network across the nation like roads, railways, telecom and airports; the technical as well as financial support from the Government of China side has helped a lot. The recently inaugurated Addis Ababa-Djibouti 756k.m. fully electrified standard gauge railway is helping the country to easily transport its export commodities through the port of Djibouti. Similar railway construction projects are underway in different parts of the country and other standard gauge networks are in the pipeline.

Another growth potential that Ethiopia endowed with is the energy sector. It has a potential of generating 45,000 megawatts of hydroelectric power, 40,000 mw wind power and 5,000 mw geothermal power. We are inviting investors to jointly develop this huge environmentally friendly energy potential.

Finally, I wish you all to have a successful deliberation and would like to thank once again the Road and Belt Institute for this very important forum.